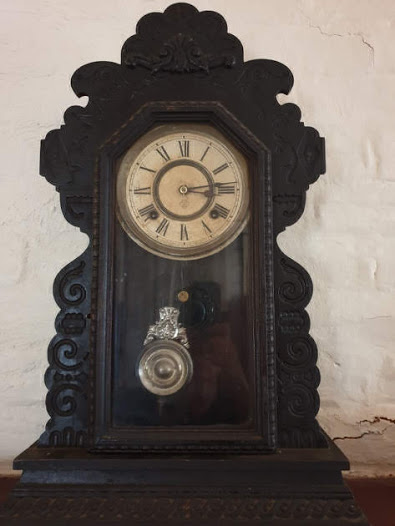 In pride of place on the kitchen mantelpiece is the Ansonia kitchen clock, now happily marking each hour and half hour with the appropriate number of gongs.  The clock dates from the early twentieth century and was made by the Ansonia Clock Co., New York.  This clock is the “Kirkwood’ model which was being sold in 1914.

In 1844, Anson Phelps formed the Ansonia Brass Co. in Connecticut to supply clocks.  The Ansonia Clock Co. was formed in 1850 as a subsidiary and in 1877 moved to a factory in New York.  This was followed by a second factory in Brooklyn in 1880.  In early 1914, Ansonia was producing 440 different models but by 1929, the company had folded and its equipment was sold off.

Our thanks go to David Buntine for his work restoring and servicing our clock and for providing the above historical information.